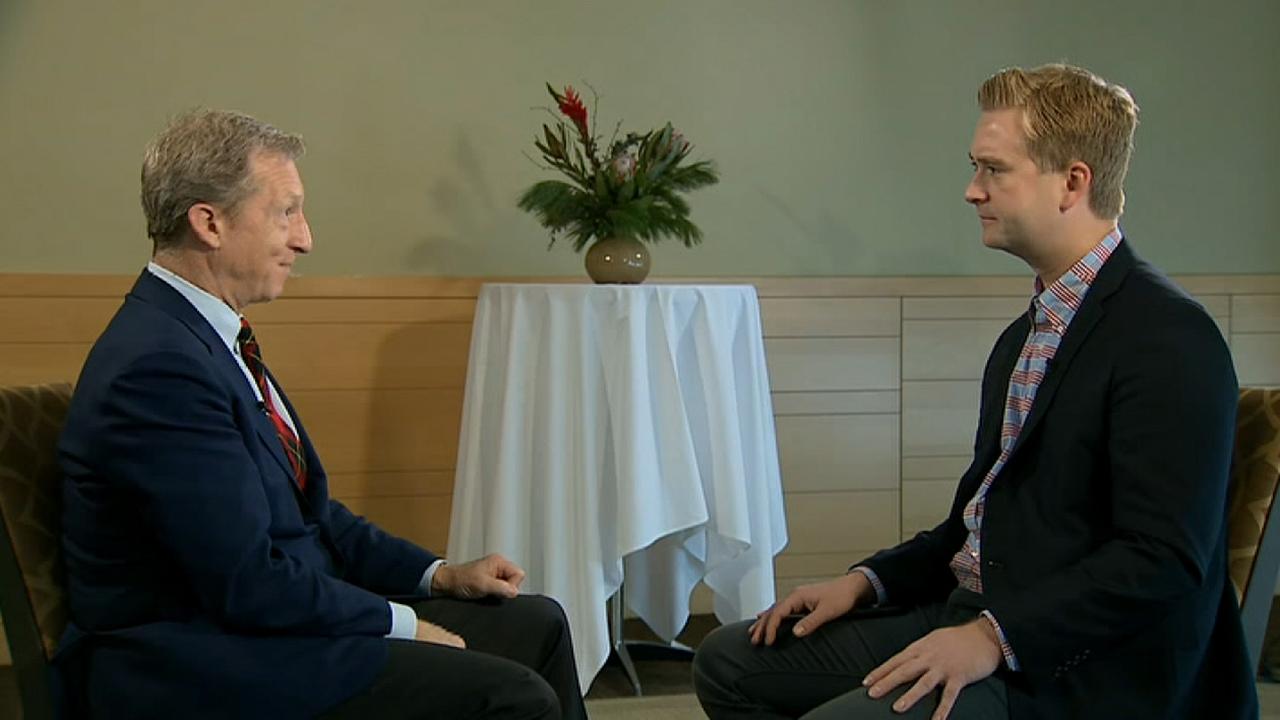 Tom Steyer: This country is not investing in and supporting its citizens, people are being hurt intentionally

Billionaire businessman Tom Steyer in search of his first breakout performance on a Democratic debate stage may have come close Friday night in Manchester, N.H. by trying to turn a heated discussion on healthcare into a referendum on President Trump’s economy.

“Everybody on this stage is better on economic justice and health care than anybody in the Republican Party and a million times better than Donald Trump,” Steyer said. “We are going to have to take Mr. Trump down about the economy …and he is going to beat us unless we can take him down on the economy.”

Steyer’s comments came the night the government’s monthly job’s report revealed the economy added 225,000 new jobs in January marking the 112th straight month of gains. Last month the U.S. Census Bureau revealed that the U.S. homeownership rate is at a multiyear high.  And while U.S. stocks closed lower Friday, it comes just one day after all three benchmark indexes finished at record highs.

Before Steyer raised his economy point, healthcare bubbled up once again to be a hotly contested issue. The only difference between past debates and the event held at St. Anselm’s College is this debate comes on the eve of the nation's first primary.

The hotly contested words over healthcare started out with the former mayor of South Bend, Indiana, Pete Buttigieg, talking about how his candidacy is a rejection of “trying to fall back on the familiar” and of “dividing people with a politics that says if you don’t go all the way to the edge, it doesn’t count.”

ABC News’ moderator George Stephanopoulos asked Buttigieg if his comment was a reference to Sen. Bernie Sanders, Buttigieg replied: “Yes, because we’ve got to bring as many people as we can into this process."

Sanders responded quickly, “The way you bring people together is by representing an agenda that works for the working people of this country,” which he said includes his touted Medicare-for-All plan.

The Vermont senator’s touting of the costly and controversial plan opened the door for former Vice President Joe Biden. “Bernie says you have to bring people together and we have to have Medicare for All,” Biden said,  “And he says he wrote the damn thing, but he’s unwilling to say what the damn thing is going to cost.”

Biden has offered a plan that according to his campaign web site will “build on the Affordable Care Act by giving Americans more choice, reducing health care costs, and making our health care system less complex to navigate.”

Sanders came back at Biden and said “if we do what Joe wants,” the government “will spend $50 trillion” on healthcare.

While costs for how much any of the Democratic healthcare programs will cost are far from fixed, Sen. Amy Klobuchar of Minnesota said the future of healthcare isn’t just about the costs, it is about what is possible.

“I keep listening to this same debate, and it is not real," she said on the debate over health care. "It is not real, Bernie, because two-thirds of the Democrats in the Senate are not on your bill and because it would kick 149 million Americans off their current health insurance in four years.”

The two-term senator also asked rhetorically that the Affordable Care Act “is now 10 points more popular” than President Trump, “So why would we abandon it?”